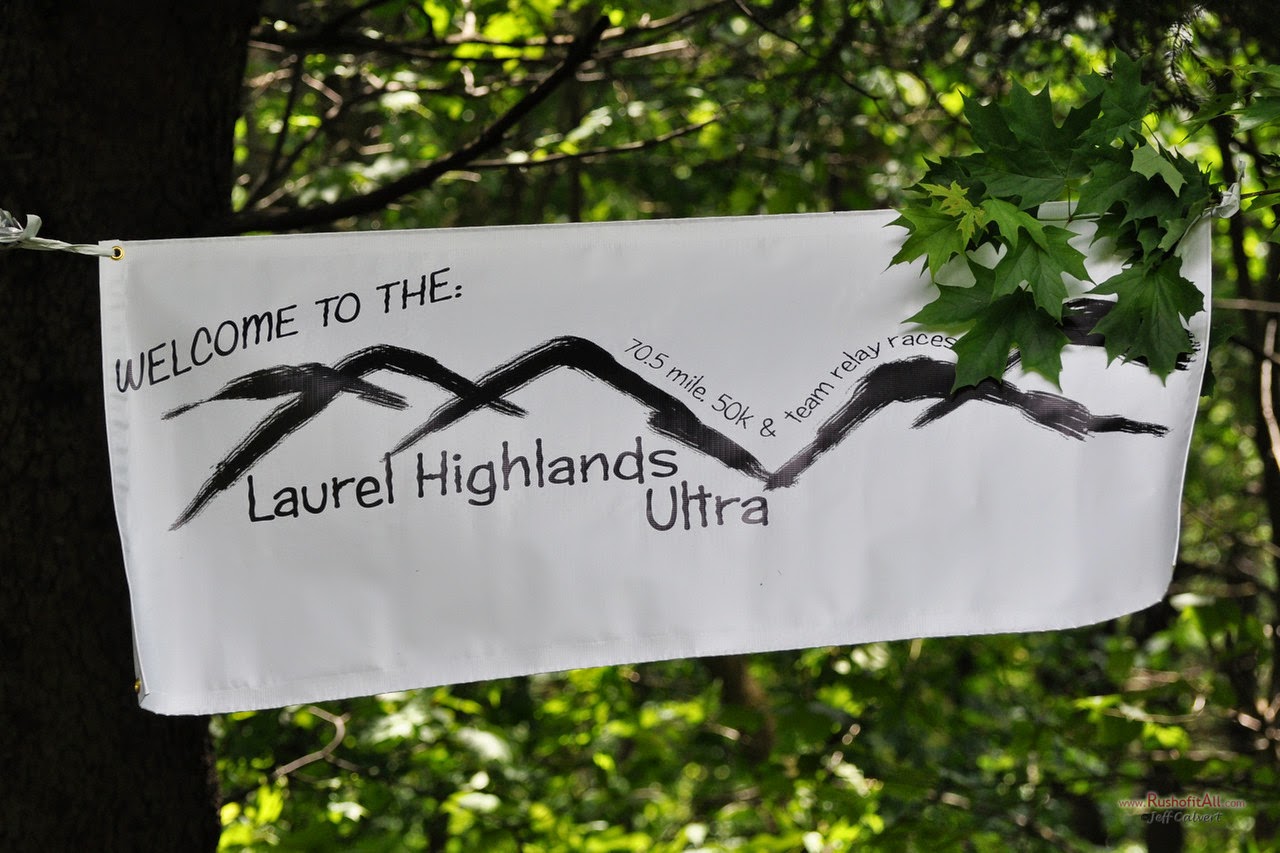 Trying to write this race report on Laurel Highlands Ultra while my legs are not fresh but my mind still is. It’s a 70.5mi trail ultra that takes place on the Laurel Highlands trail that starts by the waterfall at Ohiopyle and finishes just outside Johnstown, PA. This is the race that people say it may be 70miles, but it feels like 100. This is good, this is what I was needing since I didn’t have a summer 100 on the roster.
Rick Freeman, RD and Tim Hewitt, co-RD took over the race 15 years ago which has now been in existence for 35 years. It used to be a self-supported race with an 18 hour limit, no aid stations, and just the 70.5 mile distance. Today, they have great aid stations, 50k distance, 70.5mi relay, and 70.5mi individual distances. I think all total, there were about 340 runners amongst the various distances for the 2014 event.
I had talked to a few folks who have run it in the past and depending on who you asked, the response was something like It’s runnable after mile 35….take it easy on the first 35 miles….don’t run until you’ve finished the 3,000’ climbing after mile 8. After looking through the times from last year and looking up people’s names on ultrasignup.com, I figured I could be somewhere around the 15 hour mark and it things went really well, in the upper 14 hr range.

We were on the bus from the finish at 3:30am sharp, arrived at the start about 45mins later where they had some water, coffee, drop bag drop-off, & check-in. It’s your typical atmosphere pre-ultra….lots of people chatting, hitting the portos, sipping coffee, adjusting gear, and telling stories. Rick urges us over to the start and within a few minutes, we're off and after a short stint on the road, we hit the Laurel Highlands trail and begin the muggy ascent. I kept trying to run easy, run easy, run easy, speed walk easy as it got steeper, but even going easy on those sections was just not easy. A few miles and a few very solid climbs later, it was apparent that this was going to be a true challenge. The humidity was incredibly high, the roots & rocks made for a lot of focus on the foot placement. So, about 8 miles in, there was some respite on the hills…and about after mile 10, it simmered down a bit more and was much more runnable. Yes, runnable. Lots of rocks, lots of roots, but the hills were calming down. For the next 25 miles, there were lots of rolling hills, some short steep ones, beautiful trails and it varied from speed hiking at 15-16min miles to running 10-11 min miles. The first aid station was at mile 19, I was using Hammer Perpeteum so I had two multi-hour bottles to last me to mile 46 where my first drop bag was. I wore my Altra Olympus which has ample cushion, lightweight, but not much lateral support which was wearing on me a bit due to all the off-camber trails. Otherwise, they were pretty good for the race. 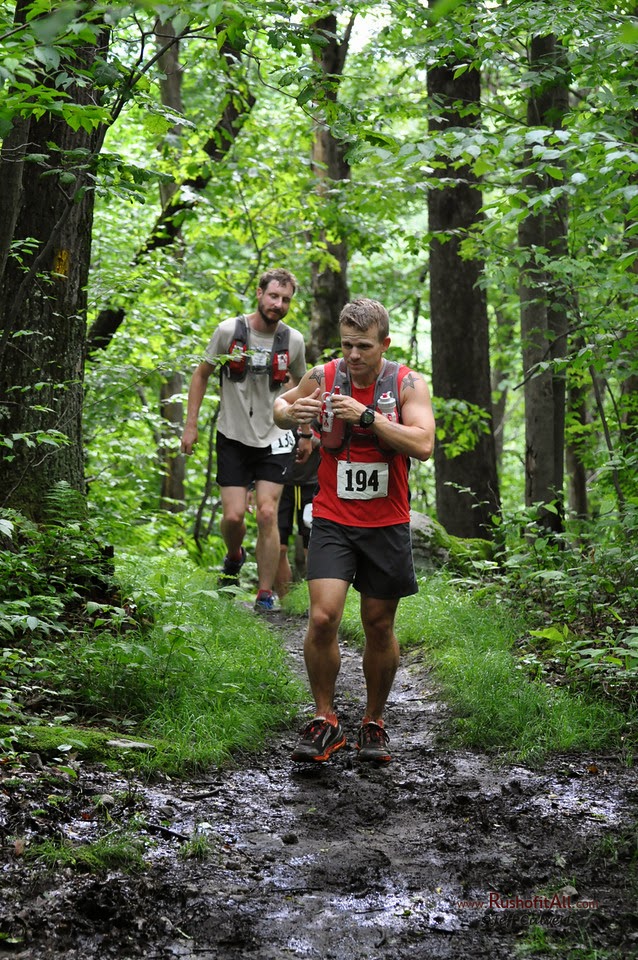 The trails are absolutely beautiful. The ground cover is almost all ferns or mountain laurel. There were so many sections where you would look out for a moment and it was just ferns all around, with the trees creating a high canopy. Periodically, you weave through these verdant rock structures, covered in moss, with the trail winding through them. Every so often, you get a moment to peek through the trees and see that you are in the Highlands and how high up you’ve run. Somewhere around mile 35 or so, the trails came up to a ski lodge where you see a sign saying you are at the highest point in the Laurel Highlands, it was beautiful. I was running with the lead female at the time (Johanna) and we chatted about running as we plodded along. I kept with my 1 Salt Stick every 45 mins, perpeteum, and lots of water. I felt good and as the trail smoothed out, it was great to be able to actually run for long stretches.


I hit the mile 41 aid station where Dan & Anne from Ohio were helping me out, Johanna was starting to feel the effects of the run and I told her to take her salt before she headed out. She was leading at that point but fell back a few spots by the end of the race. I got to 46 where Rich was waiting for me, changed my shoes, socks, drank a redbull, took some food, soda, water, Gatorade, and headed off with a full stomach. It made a world of difference…I was really needing calories so when I got to 57 I ate a lot more, grabbed my 2nd drop bag with headlamp, did another redbull, ramen soup, grilled cheese, soda, water, and took off. I was feeling good  and decided I was done playing leapfrog with some other runners (as enjoyable as the conversation was) and with a sub 16hr finish in sight, I focused and pushed hard. I got to mile 62 after a quick stop in the woods to take care of business and loaded up on some soda, & food. They told me 2 miles flat, 3 miles rolling, and 2mi downhill to the finish…and they were right. I pushed hard, seeing 10min miles and faster until I hit the hills, speed walked only when I had to, and mile by mile, reeled in the finish. I passed a few people and with just 2 miles to go and a lot of really rough downhill, I pulled out the headlight. Jody from Fleet Feet had loaned me his Garmin Fenix 2 to try and it was pretty accurate throughout the trail (which is marked EVERY mile with a cement post with that mile) and I kept checking to make sure that the variation between the garmin and the mile markers were accurate so I could make it under 16hrs.
I emptied my bottles, barreled down the last 2 very rocky downhill miles, and with a few hundred yards to go, passed one last runner. I rolled in at 15hrs 36min where Rick immediately gave me the award which is a beautiful wood rendition of the 70th mile marker.

This race is hard, it’s very technical, it’s very hilly, but it was absolutely beautiful, historic, and was extremely well organized with a great atmosphere. I will say that if it wasn't so beautiful, it would quite possibly be a really hard race to want to come back to...but it's just beautiful. I stayed downtown Johnstown (which has a significant history from the Great Flood in 1889 which killed over 2,200 people then two more floods in 1936 and 1977) and opted for the pre-race dinner which I recommend for meeting these amazing people, answering questions, and getting some good food.

I’m writing this 6 days after the race, I’ve ridden the bike and run hard twice. I would’ve run a little more but work travel has just not  allowed for the time, which is probably a good thing. My quads were sore and had some post race swelling in the feet but that all subsided within day 2-3. My metabolism was off the charts for the last couple days! This almost has the feel like I completed a 100 miler. Great race, great people, I’ll be back to do it again.

z
Posted by ultrailz No comments: