I've got to write this while it's fresh in my mind. Let me start by saying that I was wishy washy from the start with the Cleveland Marathon. I was fortunate to pick up an entry at the Expo literally 2 days before the race. My training plan called for a double Saturday, double Sunday including 26mi that morning...no taper, and more than one speed workout during the week. It's all training for Leadville....so the best part is, no matter how I did...I lost nothing and gained another experience.

After all the exceptional results I have been experiencing under the Seebohar coaching through Runwell, I thought I could eek out a 3:15-3:25 marathon Sunday. I ran with Jim Mann who I know could pace me to a 3:15....but I told him I was really just wanting to beat my 3:32 PR. Let me say this, I am not a road marathoner...I've done a few...but I have never really trained to be fast at the marathon. One day...but not yet. I like the trails too much.

We took off, you could tell it was going to be a warm one. We said we'd hang at a 7:30-7:40 pace until the 1/2 and then pick it up a notch. I've been doing this on hard trail runs so I had confidence that the road would be a cinch. 3mi in I knew where I was headed...the legs still a little heavy from the 8mi threshold trail run, the previous day's double, and so forth. Who cares, right? Just suck it up and run fast? Naw....I think I ran 7:40'ish for about 12 miles before I saw my pace slipping close to 8's. I told Jim one last time, "go...I'm a big boy, I can handle the rest" He did....and finished strong for such a hot day (3:31), for a guy who runs a 3:06...It makes me feel better. It was getting hot, I wasn't feeling super agile & light. Just felt like I was a wanting to trod along. I hydrated very well, lots of nuun, e-caps, did my UCAN in the morning, 1 GU around mile 21, the rest was just dealing with the heat. No cramps, but the pace dropped and I could care less. I kept thinking about spending time on my feet in the heat. How much harder Leadville will be, how much harder a road marathon was that day than touring along shady trails for 26miles.

I was doing a bottle of water between each aid station, dumping a cup on my head, and taking off. Under one of the last bridges in MLK, I ran up to the Medical tent and proclaimed that "my nipples need medical attention!" I laughed...no one else did, the dude just handed me a wooden stick with Vaseline on it for me to apply my own medical attention. As I ran away I re-affirmed that it was really fun to run up and say that...I finally got a smile. I think they were tired of chaffing nipple runners.

The aid stations were great, volunteers are great, and with the heat above 85 after such a mild Spring, I dont think i was ready for it. So, it became a game of heat & hydration. Spirits were good...I ran with a couple BAFF tri guys for a while, one who was completing his first marathon. At mile 25, I see Kirsten in a pink tutu....she had Leghorney with her and so I was able to carry her (the leg) into the finish line. That was probably the best part. I rounded the corners with the leg raised as people cheered. With the last .1mi to go, I raised the leg again and took the final sprint while the announcer called out about a runner with a mannequin leg "only in America" he said. Kirsten & leg made the Plain Dealer and I got interviewed at the end about it as well by Camp Sunshine. Such a fun concept.

I will say this, I have never ever puked at a race....but at the end of the sprint with the leg, I stopped and as a lady asked me what the deal was with the leg, I started to heave....heaved again....held it back...still haven't puked... Then continued to tell her about the leg, it was a charming moment I am sure. 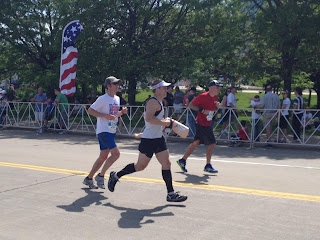 I cannot wait to see the race photos of the finish with the leg held high in the air. Oh, I finished at 3:59 on a 3:15 goal and don't care. I got to see a lot of friends and supporters, people ran their first marathons, Radames KILLED it at 3:16 after a 50miler two weeks ago! It was a great time and a lot of fun....but man, it was hot. 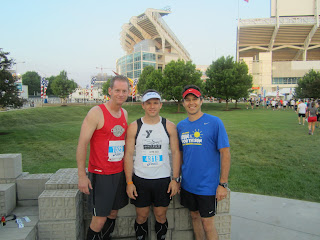 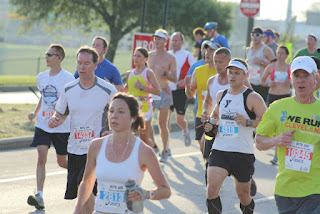 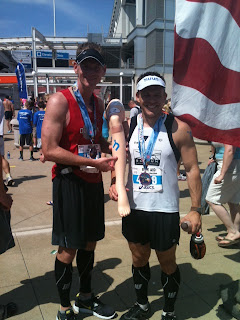 Later that night, I got out and did 40mins on the trails.....tomorrow I've got a ridiculous 10miles of threshold planned.

I will admit a couple things: I was a little disappointed in myself for not at least getting in the 3:20's....but as I look back, it wasn't in the cards that day. Secondly, as we split from the half/full marathon...I saw all these folks getting to finish. I will admit that I kinda wanted to just finish up then...but at that point....there was no reason for that. I would have just had to go home and do the miles anyway!

Happy to have a rest day today, looking forward (kind of) to the killer 10miler tomorrow.