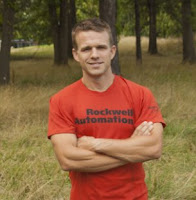 As a special note, I ran Oil Creek as a way to raise funds for United Way through my job at Rockwell Automation. I half expected everyone to think I was crazy, but people were very supportive and I was proud to raise funds this way.

This was an interesting one. I repeated the last 7 weeks of training for Leadville 100 as my continued training for Oil Creek 100. Training was solid, fitness was good, I had to work through a piriformis syndrome and was able to with the help of Dr.Tim Keyes and a ton of specific stretching, exercises, & trigger point roller.

The course is 3 loops of a 50k trail course and a final 4th loop of 7mi totaling 100.6mi. The 50k loop is just under 5,459 ft elevation gain and the last 7 mi was 1,034 gain for a total of about 17,627. I assumed that this course compared somewhere between Mohican and Burning River, being a little closer to Mohican....I can say now that I personally think this was harder than Mohican.

The plan was to run about a 11:30 pace for the sections that were runnable, let the hills, aid stations, and increasing mileage take care of the eventual degrading pace. I wanted 22-24hrs but was well aware that I would be running more like 24-26hrs. I planned on Lap 1 @ 6:30, Lap 2 @ 6:30-7:30, Lap 3 @ 7:30-8 and the last 7 under 2 hours. This was my planned conservative effort that would have gotten me right around 23 hours, less if everything went well. I had everything planned out, drop bags, food, gear, timing, everything was pretty well planned. I was getting excited and hoping that a good race was going to ensue. My crew consisted of Dave Morl for the first 62 miles and then he paced me for the last 38.6. More on that shortly. 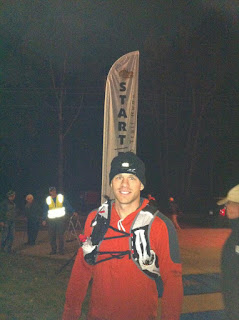 It was 22 degrees at the start but not windy, so it was very pleasant. Even with over a mile to the single-track, we ended up in a slow traffic jam for a couple miles. This is always tough, I can't handle being bunched up and anxiety was testing me about getting out of the crowd. I was ready to run alone. Although I am used to technical trail running, this one was pretty relentless....You just cant look up very often or you hit some root or rock that is hidden under the leaves or off-camber trail. A few miles later, I jumped out of the crowd and ran my pace to get away....I felt great, the course was hard, with long climbs and lots of great single track...all in the dark.

I hit the first aid station (15.5mi +/-) at 2:38, about 20 mins ahead of my plan....not necessarily a good thing, I had a little UCAN and headed on. Each aid station is followed by a tough hill....every one. The second half is beautiful, lots of pine trees a few sections that are just long sloping downhills....but there were significant uphills waiting....Ida Tarbell's Revenge, Death March, John's Run, Rockefeller's Revenge to name the memorable ones. They were all tough...but you get into a good rhythm and go. It was tough...I did the second half in about 3hr 40min, an hour longer than the first section...totaling 6:20 at the HQ aid station. I had some more UCAN, grapes, ramen broth, and SCAPS then moved out with Dave pushing me across the mat. 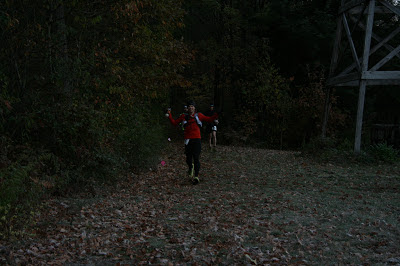 I ran with a couple of great guys, Jason M and another guy who I never got his name....but we were trucking along for a while when I decided I needed to throw up. I slowed it down, walked a bit and began the sudden and long battle with nausea. I walked into AS#1, Wolfkiel and tried to get back on track. I was walking past these young girls at the AS all cuddled up to stay warm...they asked if I needed anything and I said I was going to find a place to yak. I heard a collective "ewwwwwww" which made me smile. One of the AS volunteers got me some ginger and saltines...and I headed on my way, walking, up the 11 switchback hill. I continued this walk from mile 38 to 44. I literally lost hours..going from an 11:30 pace to 25min/mi..I didnt want to turn around, I didnt want to go forward, I wanted the nausea to go away. I tried to run, no luck....just kept dry heaving. I sat down more than a few times while people passed. Steve Hawthorne passed me asking what my plan was...I told him I was going to get to the next aid station and call it a day unless this stops, I was pretty certain about it. Not much longer a couple of the 100k runners came through, realizing I had lost at least an hour now....I kept waiting for my friends to start passing me but I was alone for a loooong time. Chris Basich (100k) passed me and I asked that he tell Crystal and my crew, Dave that I was not doing well and will probably want to step out of the race. I spent the next 2 hours debating a DNF, I could walk like this and finish, but I really just wanted to go home and see my kids....I started to get a little emotional about my kids....but kept plugging along.

I finally started being able to stomach the saltines....cracker by cracker I started to eat and feel a little less nauseous. I walked into the aid station at Petro Center and Dave came to greet me. This is the part that having a strong crew made all the difference. I told him I didnt want to do another lap...."I know"...then he got me food....I dont want to go to 62..."I know"....more food. I could not face him and say "I am DNF'ing" it just wasn't in my vocabulary....not while I was taking food and realizing that I was getting better. I sat for a good 20 mins, and ate the entire time. He made me a "feed bag" with all kinds of stuff (fig newtons, peanuts, cashews, peanut m&m's, raisins, crackers, pretzels) and I asked for my hydration pack, headlamp, light jacket for the potential rain. He sent me on my way. Within 30 mins I was running again...and running strong. Food was the miracle....go figure :)

I rolled into AS#4 at mile 62 late that night....9:15pm? I felt good, and was ready for Dave to pace me....I was ready for a killer last loop and DNF'ing was not even an iota of a thought. He asked what I wanted to do and I told him head out, he smacked both my legs with pure joy and finished up in the AS before we headed back out. It started to rain pretty heavily, which I like....I love running in the rain. 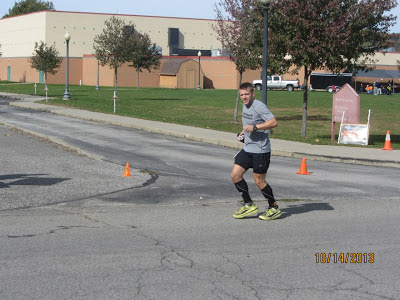 I can make this shorter....we killed it, ran in the dark the next 15 miles in about 3:11....we had some ups and down, but mostly trying to recovery from hills. The hills were taking a lot out of me and my quads weren't used to the downhills.....they hurt, but it was just muscle pain, I would take a couple deep breaths and then get into the shuffle. A slow shuffle is faster than my fast walk, so we tried to keep the shuffle as much as possible. The last 15.5 miles were tough....lots of hills, rain, etc....but we were moving forward and knew that finishing was getting closer. We ran what we could....then ran into the AS#4 for the final 7mi loop. We re-fueled at the highschool and went out to get this damn thing over with. We left the aid station with 27 hours on my legs. 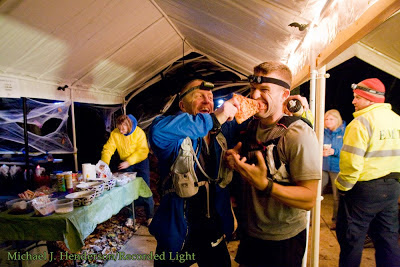 The last loop is nice-sort of. You only have about 4 miles on the trail....but at least .5 of it is a crazy ass hill called the Hill of Truth, about mile 97-ish of the course. We got it done eventually...and when it merged with the trail at the top, I had it....I needed to knock it out...We did a quick calculation to be sub 29 and I just aid, let's go. We did....somehow we knocked out 8-10 min/mi averages for the last 2.8 miles, finishing what felt like sub 8. 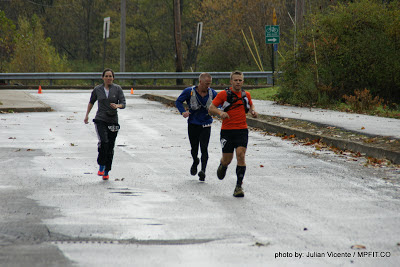 28hr 52min 36sec in the books. It was a great comeback story and although I was hours away from my goal, I was happier with a comeback like this than a DNF. I talked to a lot of really great people on the trail, sharing stories, and experiences. I can't thank Dave enough for the support both crewing and pacing, it makes the story all the better.

A lot of people ran an amazing race over the weekend, not all of us finished.....but the fact is, if you crossed the start line Saturday morning, you gave it your best. I am really proud everyone out there.....ultras are not easy, that's why so few of us do them. 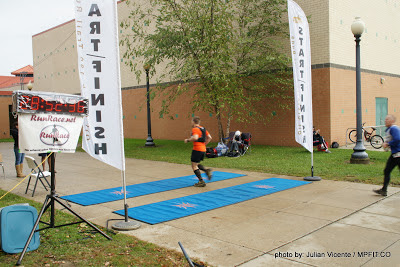 I still haven't learned to eat and stop going out fast. Plenty of time to get it right. 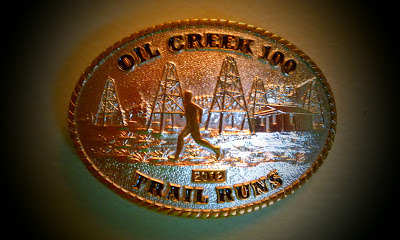