I suffered but I didn't suffer enough. 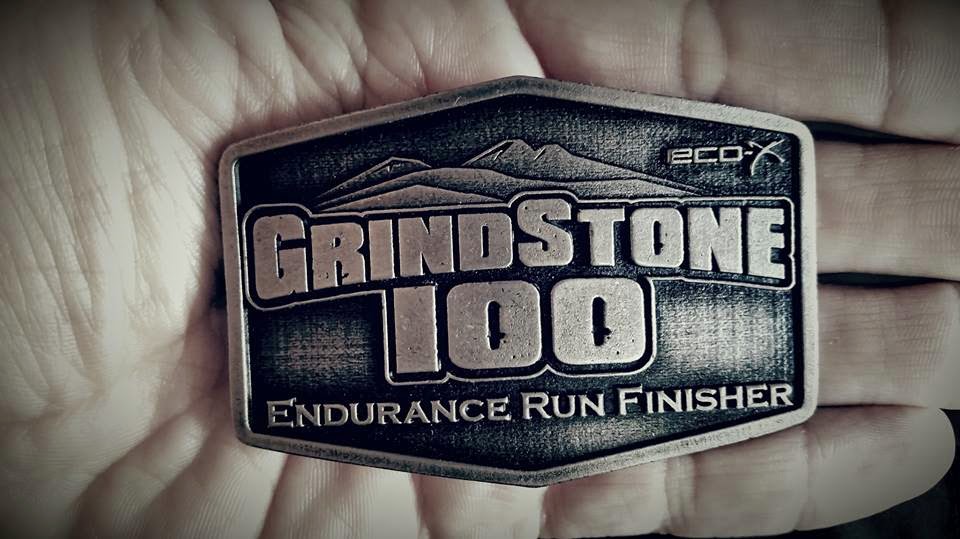 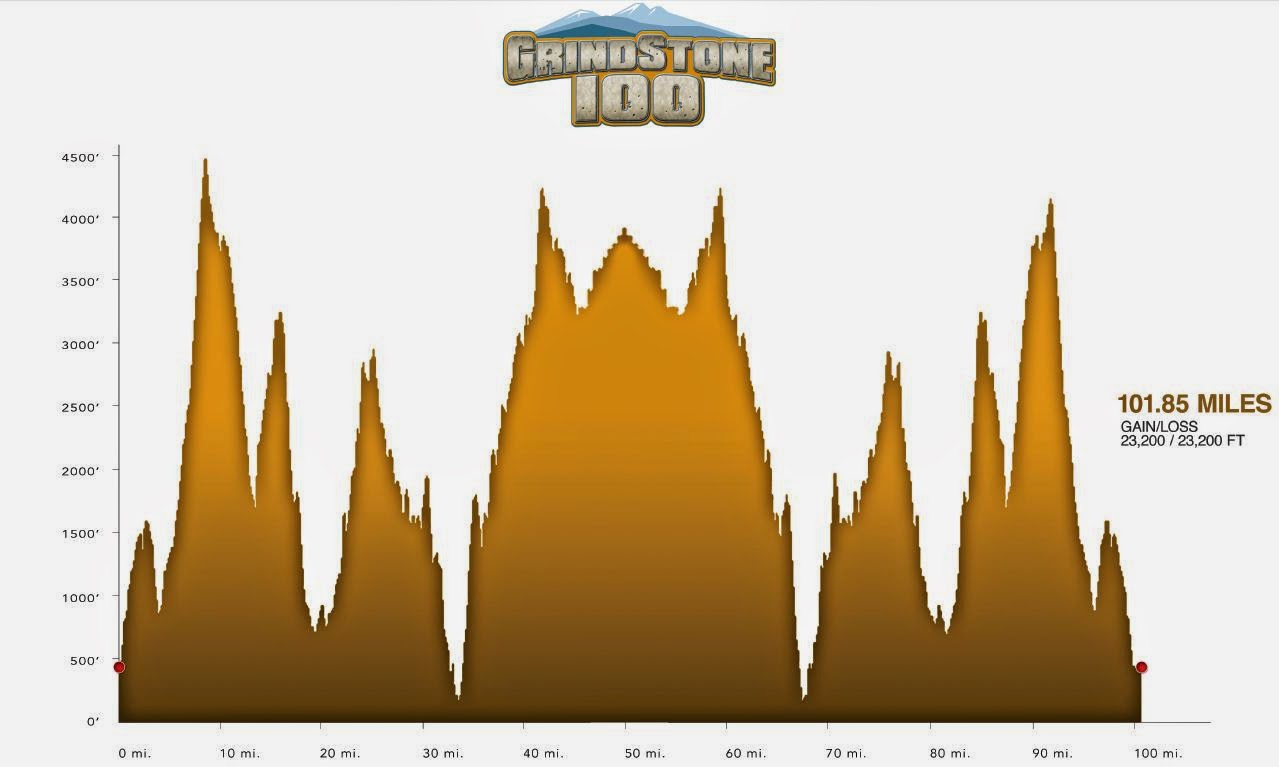 I have been training well this year with only minor setbacks being due to work & non-running life schedules which of course trump ultra training. I’ve continued to utilize the same 8 month training cycle that I have used successfully for the last couple 100 milers. It has a strong base building phase, distance, speed & hill work with a lot of cross training and quality specific workouts.

I pushed a little too much without enough recovery prior to Grindstone, truly feeling like I had a slight case of mono. Anyone running with me 4-5 weeks prior to Grindstone heard me complain how tired I was. I would take a day off, maybe 2 with some activity, but not enough. Ahhh....the mental struggle of the Type A personality.

I told my training buddy Dave about 2mi into the Punxatawney 50k that I was pretty sure I had mono, for which he harassed me for....then I proceeded to run the slowest 50k I have run in 5 or 6 years.

Dave was slated to crew / pace me at Grindstone but unable to make the schedule work, I was going to be on my own….I had wanted to experience that on a hard course so looked like I was bound to get it. Pam Rickard who lives near the course offered to pace me so I had her to help support. An Outrun teammate, Crystal had asked about who was crewing for me and when I mentioned that I was going at it solo, she offered to come out and pair up with Pam to crew for me. It’s a funny sport, ultramarathons, people spend a lot of time helping others complete events that take many hours to complete. I’ve said it before, it’s one of the only sports I am aware of that this exists in. I felt blessed.

Grindstone was a 7hr drive from Ohio and a 6pm start in the rural & very hilly Swoope, Virginia. The course boasts 23,000 climbing and 23,000 decent due to the out & back 100mi distance. I was looking for a tough run, feeling pretty fit and shooting for 24-26 hours on this 38 hour cutoff, Dr. Horton course.

We made it to the race start about 3pm, so there was time to make it to packet pickup, meet Clark Zealand, Dr.Horton, meetup with Pam, setup camp, take in some more calories, & rest until race start. The weather was pleasant in the 50-60’s with rain on the forecast.

Nutrition:
I had planned to eat my Hammer Perpeteum and do 1 Hammer bar or Bearded Brothers bar every hour. I kept my salt stick pills about 1-2 every hour and nuun energy for the late hours when I needed caffeine in my body. Sport Leggs in the latter 1/2 of the race....as well as some Red Bull.

The Race:
Apparently, they don’t believe in switchbacks in Virginia. We had a couple 3,000+ foot climbs that really just went up the mountain. I was pushing too hard WAY too early and it came crashing down at about mile 18 when I started to fight nausea from too much GI stress. I kept forcing food when I should have just relied on the perpeteum. I was trying to front load the calories and it was just too much. My pace dropped dishearteningly to a 20min mile due to heaving on the trail, the inability to run due to nausea, and just pure discomfort. I couldn’t believe it. I hadn't even made it to the first crew access at mile 22 and I was in a dark place already.

I made it finally to mile 22 where I stayed for a loooong time. Even with 4miles at a terrible pace, I was dead on track for 24 hours but my pace was continuing to decline. My crew Crystal got me out with fresh gear & a bag of pretzels which I managed 1 bite of over the next 8 miles. She later called that aid station "zero dark thirty"....it was a bad time and I was honestly worried that I felt that bad that early. 80miles in, okay....not 22.


I struggled for a while longer with the nausea & occasional heaving before I started to come around (~mile 30), by then I had dropped 60 places in the race and the climbing was really taking it’s toll on my pace. I met Crystal again at 37 but was still struggling, she got me all set with food, gear, etc... the miles from 37 to 43 were downright terrible, slow, uphill, terrible, I have never walked so slow, my headlamp died, my handheld died and I was barely moving along. I finally made it to Little Bald Knob at 45 and started to gain momentum after a hearty breakfast at the Aid station.

By 46-7 I was the food was setting in and I was starting to come to life. Morning had come and I was only a few miles from getting to Pam for pacing. I ran into Ash Walsh who I've only known through social media. 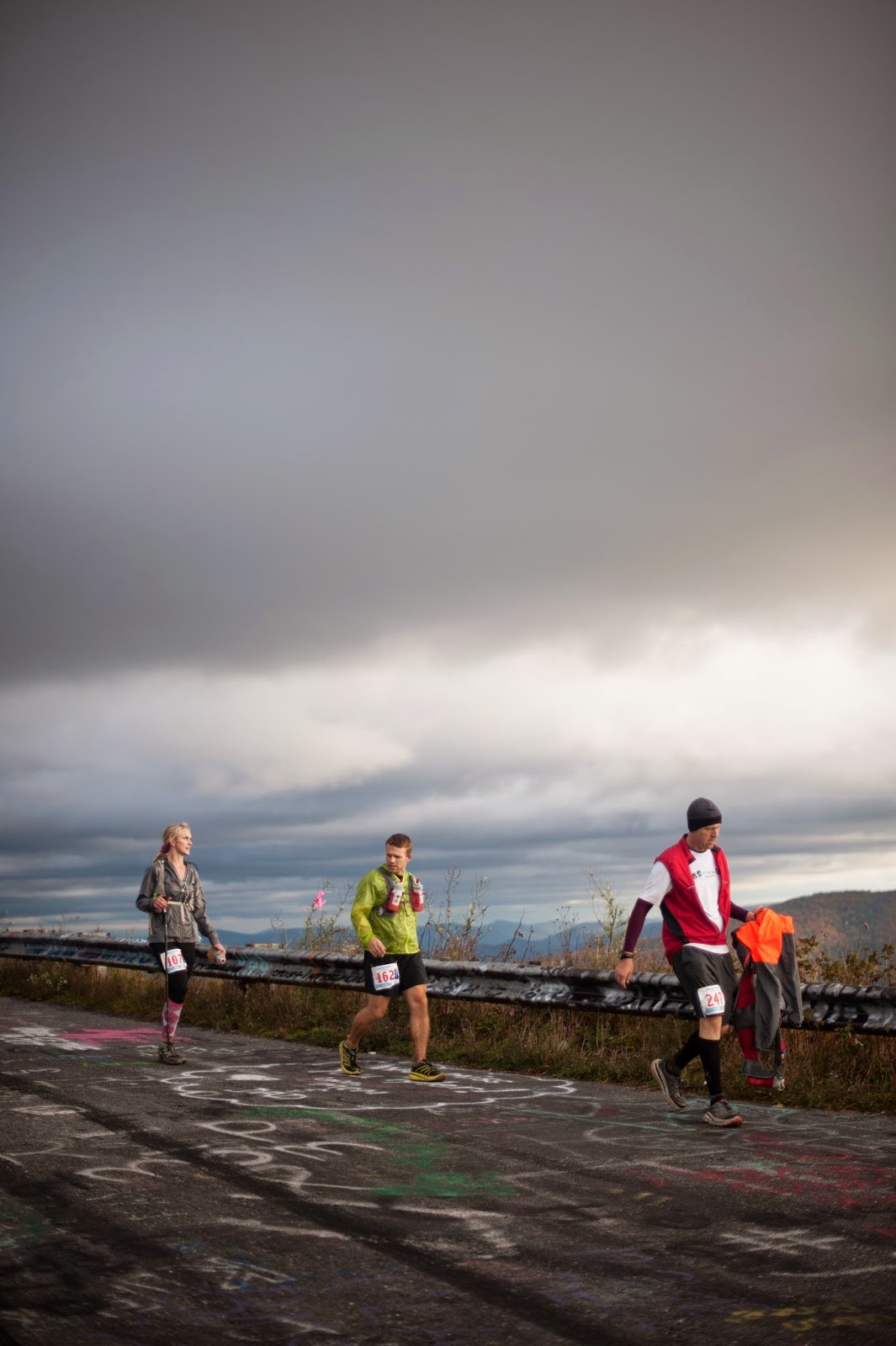 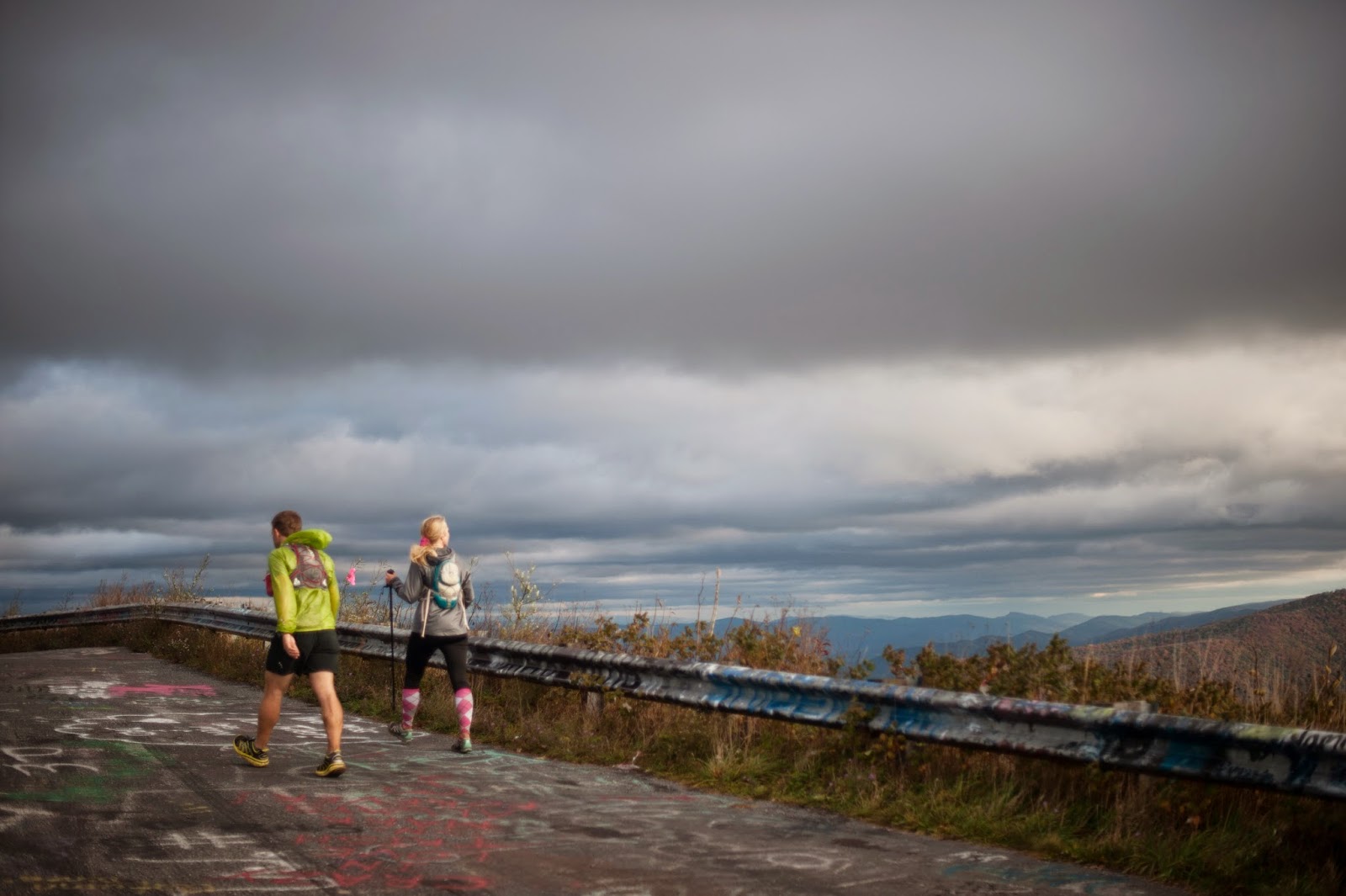 We ran a mile or so together before I really started moving along. I was eating and running really well, hovering around 9:30min/miles and bombing on the downhills. I picked up Pam at 49, & reloaded some nutrition from Crystal and off we went. It was around mile 60 where I was really feeling my Wheaties and was starting to race. Pam was a bit hesitant on the technical downhill back to mile 66 so we agreed to have her meet up with me at mile 80 to finish pacing. 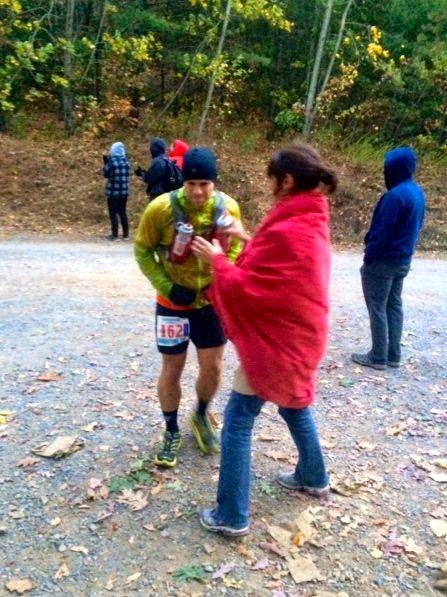 From 66 to 72 it was a lot of long climbing, no switchbacks, windy and beautiful. Although the effort was high, the pace was slow and I just settled into a hard fast speed hike with occasional running. The temps were begging to drop and the winds on the ridges were really consistent. Crystal & Pam had hunted the area for some calories for me, knowing that I was in need of more and they had found some pizza at a not-so nearby store. I changed jackets, gloves, devoured the pizza, go re-fueled and off we went. I can't thank them enough. I felt really good but it was heartbreaking to be so far off pace.
Pam & I cruised along to 88 where Crystal met us again, got us in and out, then off to mile 97. I recall telling Pam that I didn't feel like I had 90+ miles in my legs. I wasn't bragging, I felt like I hadn't pushed enough.
The internal struggle going on was that I felt like I hadn't given the race enough, knowing that I should push it but wasn't. I was pretty disappointed in myself but at this stage I was no where near the sub 24 goal and was well within the cutoff times. I was having a hard time letting my mind enjoy the process as I knew that I was so far behind. At some point I finally accepted it. Pam was a pleasure to talk with and was really helping me to push the pace, we were cruising along on the technical trails. At some point Pam burst out "do these blessed rocks EVER end?!" I laughed that this was with just a couple miles to go and they really were never ending.
The last couple miles were elusive, I had passed about 72 of the 80 people that had passed me in my darker miles and I couldn't find the path that led us through the trees across the lake. For the first time in dozens of miles, someone was coming in behind me and I kicked it in for some random 8:30min/mi for the last bit. Pam & Crystal were cheering me in and it was rather surreal to be finished. I have never "run" that long in my life. 29hrs 34min

I will say that the nice thing about a Friday 6pm start is that I went to sleep Saturday at about midnight and was up at 7am driving back home. I made it in time to hang with the wife & kids, make some dinner and catch up on what I missed over the weekend. Back to work Monday morning....

I'm writing this about 5 weeks after the event. I slept well the week after, no soreness, minimal foot swelling, was running and doing cross-fit about 2 days after the event.I would love to go back and give that race a hell of a lot more. I am proud to have finished a sub 30 at a Dr.Horton and truly had a great experience. RD, Clark Zealand did an excellent job. I would recommend it and I WILL be back for a significant PR. I really can't thank Crystal & Pam enough for the support, ultra runners create the most amazing and supporting community. It would have been hours longer without the help.I suffered, but I didn't suffer enough.


So, now I've qualified for Hardrock and Western....I've put my name in the lottery for both. We'll see what happens. I am assuming on a 1st time try, i will not get in to either.

Next up....I raced a 5mi with my daughter, have a 5k turkey trot with her again, and a 50k in January. My custom carbon Fat Bike is on it's way....so I am super excited about that!
z